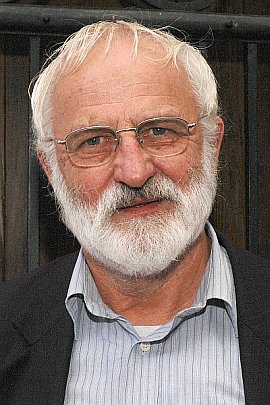 Jaroslav Krček (born 1939) is not a composer who can be conveniently placed into a particular style category; he cannot be labelled a traditionalist or an experimentalist, and neither can we classify him as a primarily 'symphonic', 'dramatic' or 'vocal' composer. Krček's work indeed touches on all these genres, and he is ever adding new ones to the list. He is a thoroughly distinct musical personality in whose work various disciplines – assimilated by many other composers only with some difficulty – meet and blend together.

Since his student years Krček has shown a particular interest in folk tradition and, along with this, in anonymous works in Czech musical history: in old sacred songs, works from the hymn books of the Renaissance and Baroque, and Christmas carols. This is a branch of music that Krček thoroughly understands, and to which he possesses a particulary strong emotional attachment. The countless arrangements of folk songs he made during the period when he was employed at Pilsen Radio are a result of this attachment, as are his numerous stylized compositions, not for folk music groups but for his own performing ensemble, Musica Bohemica. These works along traditional folk-music lines are thoroughly individual creations, far from being just highly stylized arrangements.

Through his work in this area Krček aims to awaken in his listeners an affection for anonymous and folk music, presenting his compositions in a living form, free from academic restraint and with a spontaneity that befits this form of art, whilst at the same time offering his audiences thoroughly polished performances that will stand up to the most rigorous criteria.

Forming the other main thread that runs through his oeuvre in parallel with this interest in history and folk tradition are Krček's own compositions in the symphonic, chamber and vocal genres. In this area too Krček has his own clearly formed ideas and is not one to succumb to musical fashion. He has never professed any orthodox musical doctrine or allowed himself to become tied down by predetermined rules. Neither did he give in to the dictates of the various compositional techniques that, following years of restraint, emerged in the sixties as the new salvation of music. He has always attempted to produce works that serve rather to beautify, to bring satisfaction and spiritual enrichment, so that the listener is captivated by and accepts the music.

Although Krček was influenced by his teacher at the Prague Conservatory, the composer Miloslav Kabeláč, he did not become his imitator: his musical world has its own qualities and proceeds according its own independent notions.